By Tanna M. Friday, For The Tribune

TRUSSVILLE — It has been said that architecture uses form and space to tell its story, while art has poetry about its expression. The real fusion of art and architecture occurs when the two art forms come together to bring a design vision to a level that otherwise could not be achieved and, in turn, enrich the human experience. This ability can be seen firsthand in one Huffman alumni and Trussville resident who has taken a design vision to levels unattainable by an architect or artist alone.

the two structures that sit on the 5.8-acre lot belonged to a retired World War II Navy veteran. (Photo courtesy of Tanna Friday)

Christopher Jones stood at the top of the hill overlooking Deerfoot Parkway, staring up into the concrete vacated structure. Above him, joists, beams, and electrical conduits crisscrossed in the half-light like a deranged spider’s web. His client did not show much interest and what this structure would become; Jones envisioned an ultra-modern home — one designed to blend in with nature on the exterior and expose expansive views from the interior.

According to neighbors, the two structures that sit on the 5.8-acre lot belonged to a retired World War II Navy veteran, former Jefferson County contractor, and real estate developer, Samuel A. Liles, who was building a honeymoon hotel for his wife, Tammie. Several years after Liles passed away in 2004, his family listed the property for sale.

The 650 square foot structure, located at the bottom of the property, was said to have been leased by the Department of Transportation workers to stage the interstate and also housed Liles’ church ministry group. But the 50 x 50 structure made no sense. Its 12 inches thick and 12-foot walls were made of poured concrete. 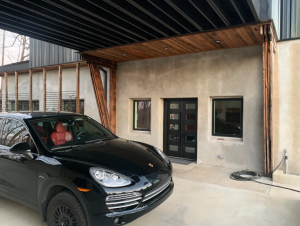 the 50 x 50 structure made no sense. Its 12 inches thick and 12-foot walls were made of poured concrete. (Photo courtesy of Tanna Friday)

“It was just a massive concrete bunker,” Jones said, who formerly served in the US Marine Corps. “It is completely overbuilt. You don’t typically pour a wall 12 inches thick unless it goes up to 14 feet, so it would normally be eight (8) inches thick for a 12-foot wall.”

Jones’ client decided against the lot and, instead, asked Jones to build a home off Queenstown Road. This decision opened up many opportunities for Jones, not only to build a house of a lifetime but also to design a home using a concept he had always dreamed of building. Add in the additional history of the property, he can now finish the work of art by creating his own masterpiece.

There was not much of a blank canvas for this master builder, but something got Jone’s attention.

“At the time, I really didn’t want another personal project,” Jones said, “It is just a huge distraction in my professional life to be working on a project because I become obsessed with things, but honestly, it turned out to be the best thing that ever happened.” 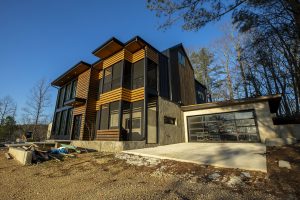 In 2016, Jones purchased the property housing the two structures and began clearing the 5.8-acre property. He began acquiring references, such as an architect and friend, Tyler Price, to collaborate and draw up some plans for the two structures.

“I always loved modern and wanted to build modern,” Jones said. “I love the simplicity of its design, the simple use of materials, and clean lines. Once I saw the structure, I knew immediately what I wanted to do with it. I had a vision of an ultra-modern house. Tyler and I worked on the composition together and discovered the more simplistic it is, the more difficulty in building.”

“At the time, modern farmhouse was becoming popular,” Jones said. “When I saw the walls, floors, and structural steel inside, I decided to put to use ‘value engineering,’ a systematic, organized approach to providing necessary functions in a project at the lowest cost, which I have been hired a lot to do in my career as a builder. To achieve the same look, but save money.” 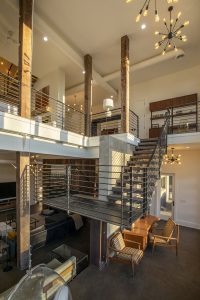 During the process, Jones also discovered that concrete houses create energy-efficient, durable, low-maintenance, safe, and healthy homes. In addition, they also provide long-term savings and contribute positively to the environment.

“It is significant because if you think of a geothermal design of this three-foot thick footing, which is so thick and connected to the ground that it maintains a temperature much like a cave would, if you will. Having that wall that runs through the master bedroom between the bathroom helps this house maintain temperature very well.” Jones said that the utility bills are extremely inexpensive for the size of the house. “Utility bills power, water, gas is never over three hundred dollars,” Jones said. “There are tankless electric water heaters, and two of the four fireplaces are double-sided, and all are fueled by gas. A fifth wood burning fireplace is located outside on the second story deck and technically a sixth open-air burning fire pit out in the front of the house.” 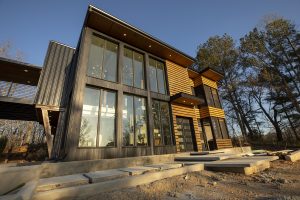 Then the execution of the structure on the hill begins. Jones lived in the small renovated house for four years while building the house on the hill overlooking Deerfoot Parkway.

“The structure had temporary water and overhead power,” Jones said. “I ended up having the power installed underground because I didn’t like the look of a power pole outside the house.”

“It took four and a half years to get the house to a livable condition,” Jones said. “I got the exterior built to the point where it was weathertight and weatherproof. I started finishing the interior once I made money in my other projects job.”

This build gave Jones validation and proof he could build in the genre and build all levels of things. 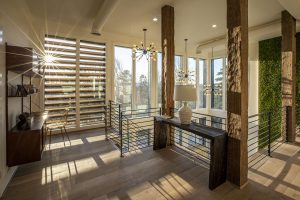 “I have built bungalows, ranchers, custom homes, and industrial projects, including a brewery (Ghost Train),” Jones said. “I have built a lot of different things and am pretty versatile in building all styles, so this was the last frontier of styling for me, and it just so happens to be my personal favorite.”

As the images were captured for this article, the sun moves across the sky, and the magic and poetry of light and color shift across the walls presenting Jones’ work of art. Highlighting reclaimed materials significant to Jone in the process of creating his masterpiece. 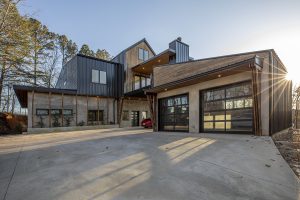 “The kitchen island is Alabama limestone,” Jones said. “I wanted something that looked like a poured concrete wall. It started with this concept, and after building a Trussville resident’s house, Jason Garner, who is a good friend and owner of Tracery Stone Company, I wanted to add an element of the house to remind me of him.”

“The wood around the fireplace is all reclaimed, ironically, off his house,” Jones added. Other elements of the house include reclaimed pine of the existing roof and cedar which was stored in the house.”

“Everything in this house is energy-efficient, including each light bulb. All appliances are energy-star rated, and the windows perform at the highest rating. The house has spray foam installation, so it is completely sealed in addition to the poured concrete, which helps with keeping the temperature constant.” 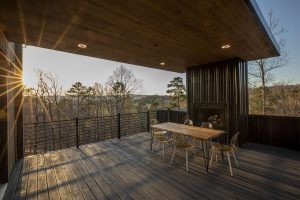 Jones eventually added garages after having a realtor see the house during its building process.

Jones had spent most of his life building other people’s dream homes, but he had yet to work on one that would be everything he wanted. After stepping out into the open air of the second-story outdoor deck, we were standing in a vertiginous space that brought the entire property into view. The late Spring sun was low in the sky, flooding the trees and his finished work of art with a softened light. Soon the street lamps would flicker around the city. The view was almost enough to make you forget the original concrete structure. It is like you are living in the chandelier on top of Trussville.

Building life into an architectural work of art