Entry-level of the revamped SD line, the yard’s range of semi-displacement shuttles, the SD90/s is the third chapter in a success story that began with the SD96 and SD118. With this new model, Sanlorenzo encloses in a smaller size. 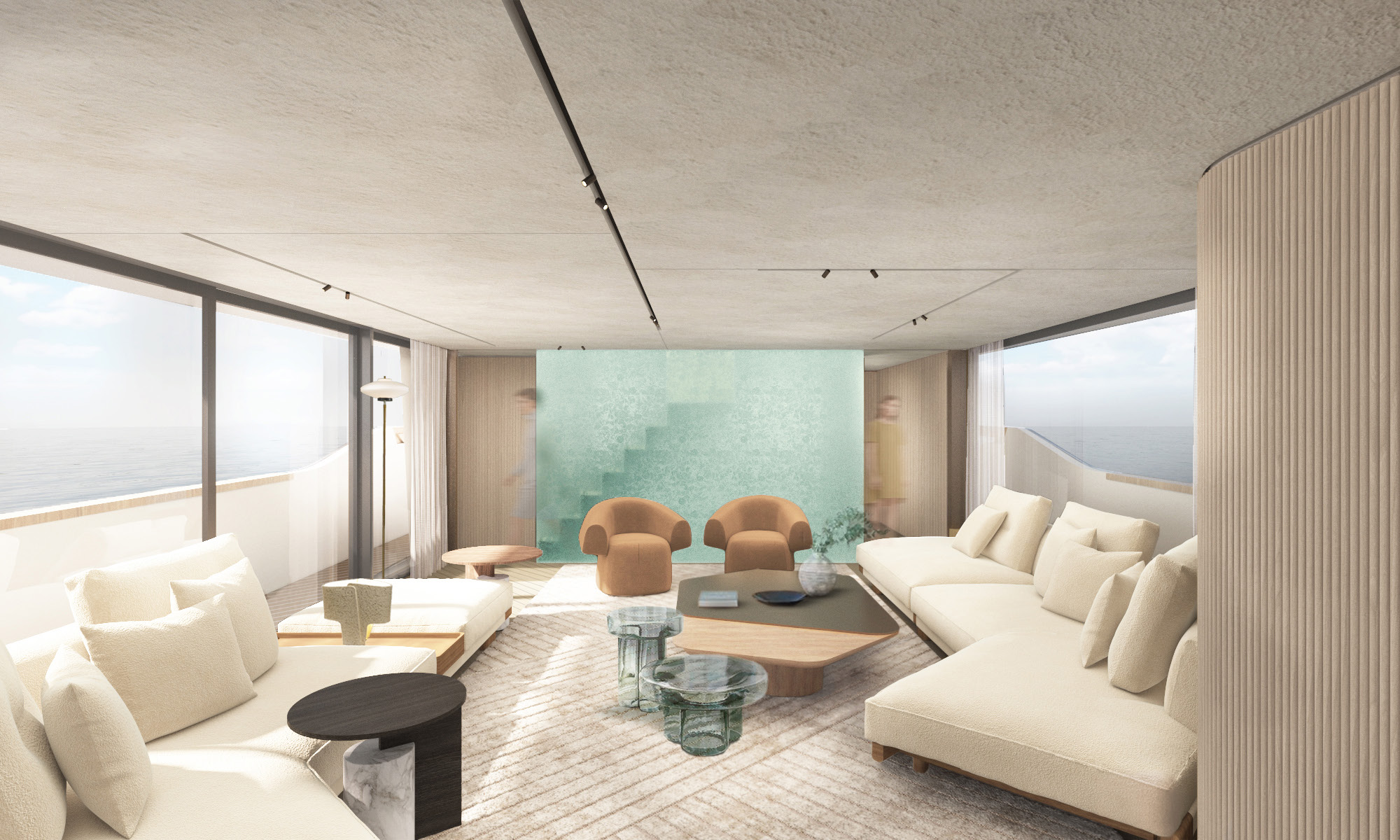 The external lines of the SD90/s, curated by the Zuccon International Project studio, structured on two and a half decks, SD90/s features an open flybridge and is configured with a lower deck, main deck. The layout is designed to guarantee maximum liveability of the yacht, as can be seen from the new solutions introduced both externally and internally, which give a totally revised perception of space compared to the other yachts in the same range. 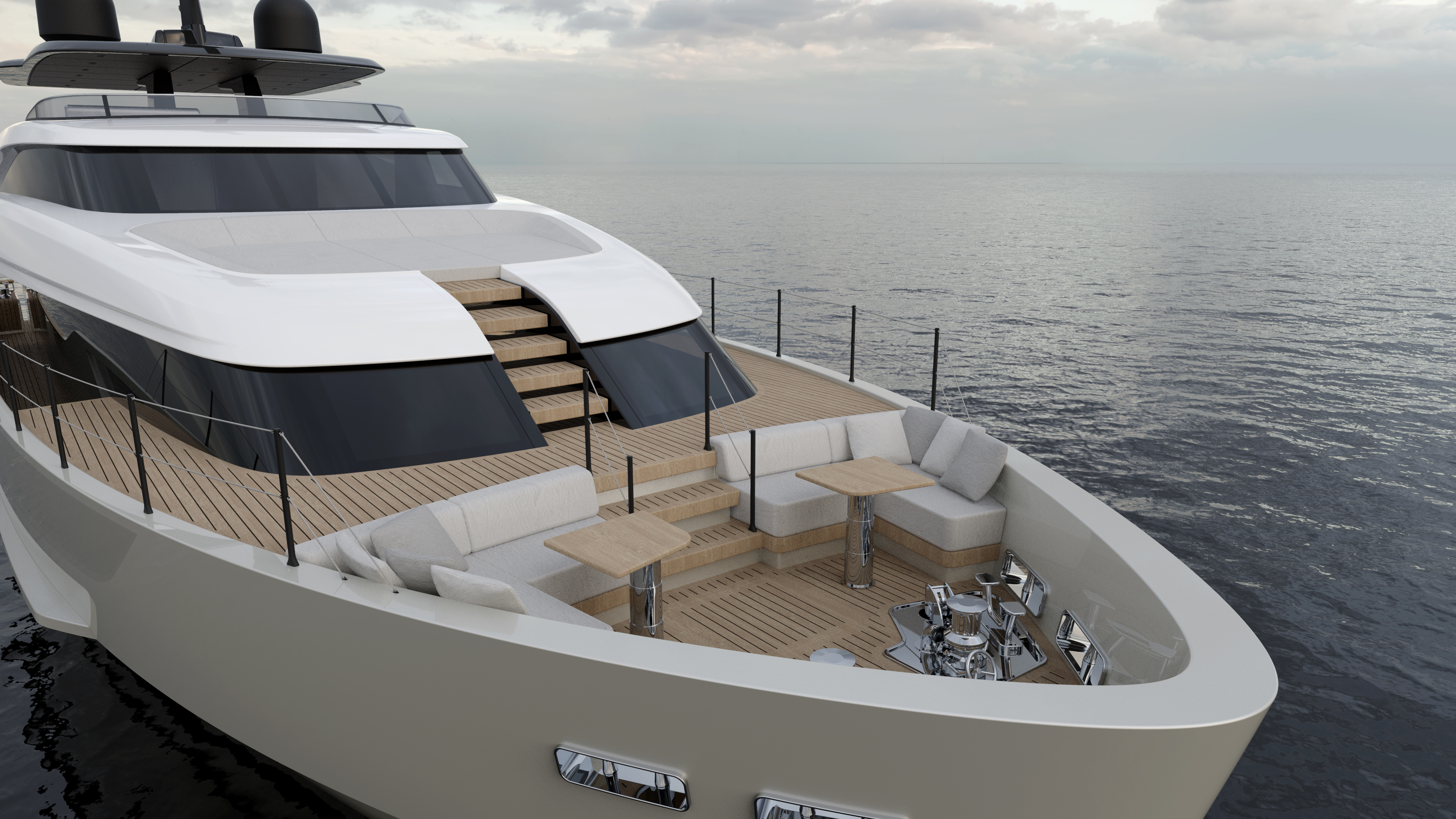 The bow area of the main deck is conceived as a partial full beam and characterizes the volume of the owner’s cabin in an unusual way, providing a more spacious area inside compared to a traditional layout. The bow area is designed to enjoy the boat to the full in all its spaces and includes two different configurations designed to meet the desires of customers who like to relax more or those who prefer conviviality instead. The first version features a sunbathing area distributed in two areas and on two levels, while the second consists of tables, two sofas and a raised sunbathing area. Both layouts allow guests a direct view of the water, once again underlining the importance of the connection with the sea. The fly bridge is minimal, with a lounge and dining area and a very light T-top in line with the boat’s volumes. 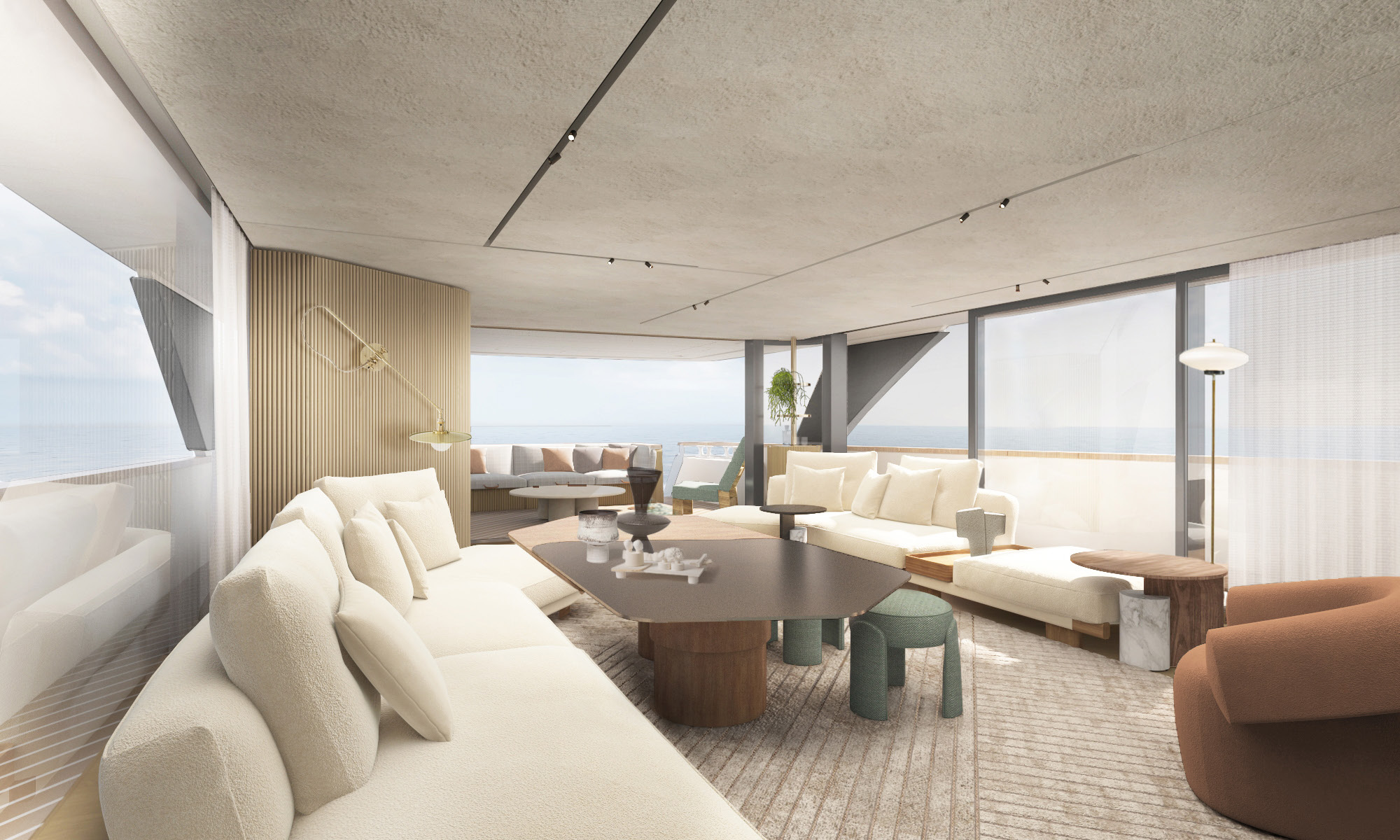 The interior design of the SD90/s is made by Patricia Urquiola. This is her third collaboration with Sanlorenzo. 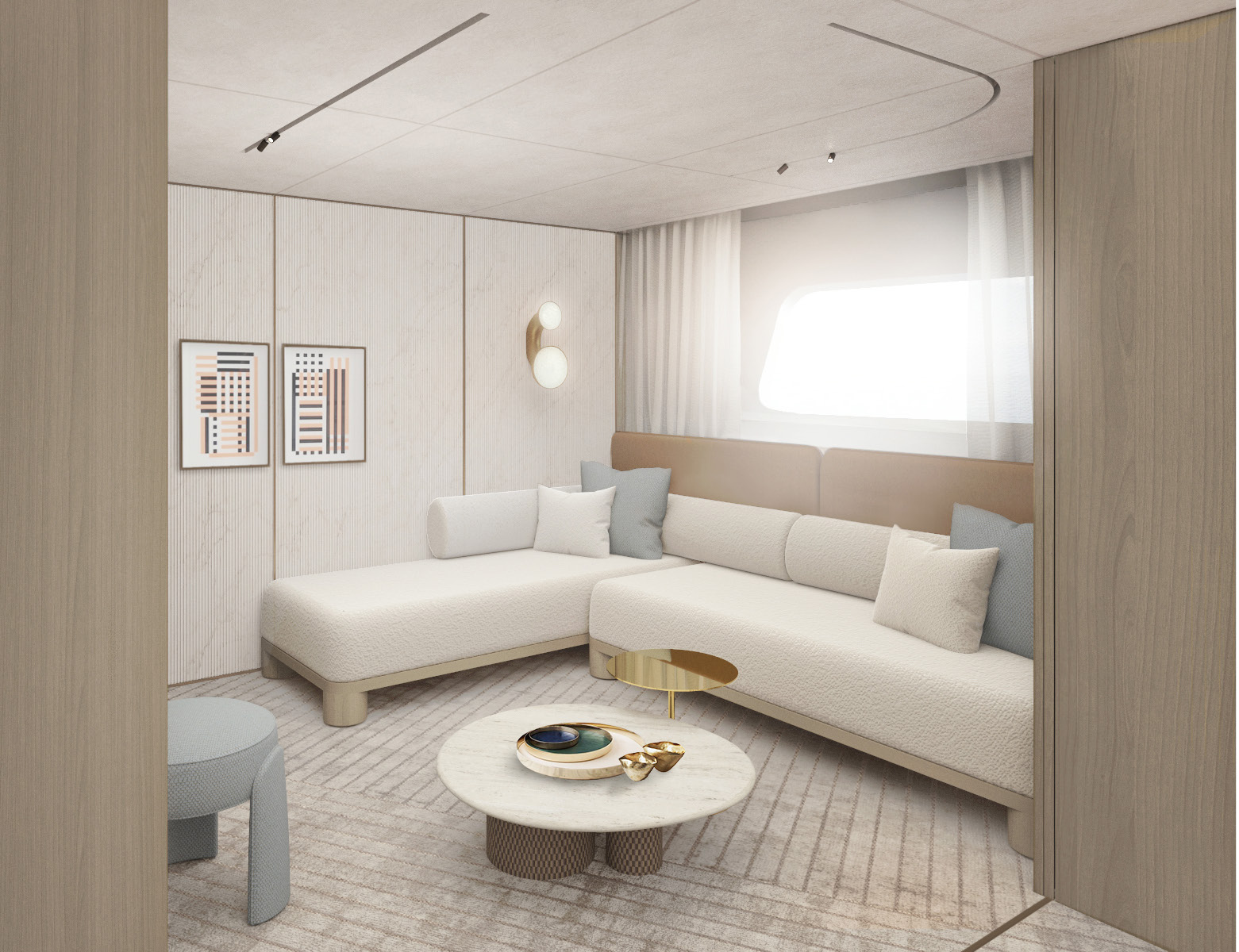 “From the very beginning of our collaboration on the SD family, the entire Sanlorenzo team has been receptive to my contribution as a designer from outside the nautical world, and with a very open dialogue it has been possible to make several changes over the years. SD90/s already shows great willingness to think about many other aspects beyond interior design, and I feel this is the beginning of a collaboration in which we strongly believe. I am sure that some of the solutions that we have studied and employed in the design of SD90/s will be internalized by the company and will be part of the research that Sanlorenzo is successfully carrying out,” says Patricia Urquiola. 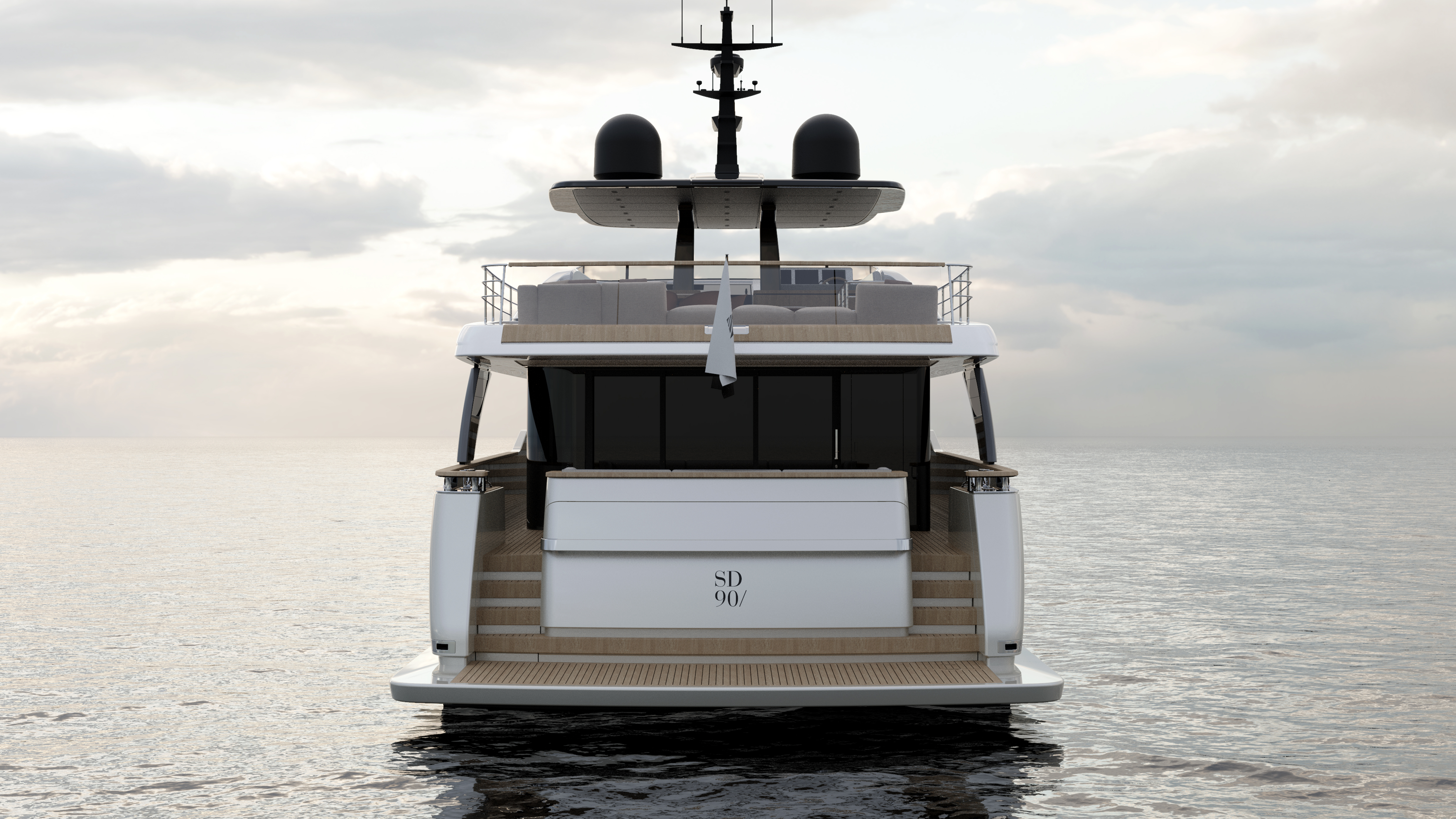 The flexibility of the interior of the SD90/s allows the yacht to adapt to the different needs of those who live it, evolving and transforming itself through unprecedented solutions of furnishings and configurations. The layout of the saloon on the main deck makes it possible to have both a lounge and dining area, solutions typically found on larger yachts, thanks to the use of tables that can be transformed in height and comfortable sofas, an interesting choice for convivial moments.

The lower deck can be transformed – the space in front of the descent staircase is a lounge area that, if necessary, can be closed off and become a private cabin in which the sofa is converted into a bed. 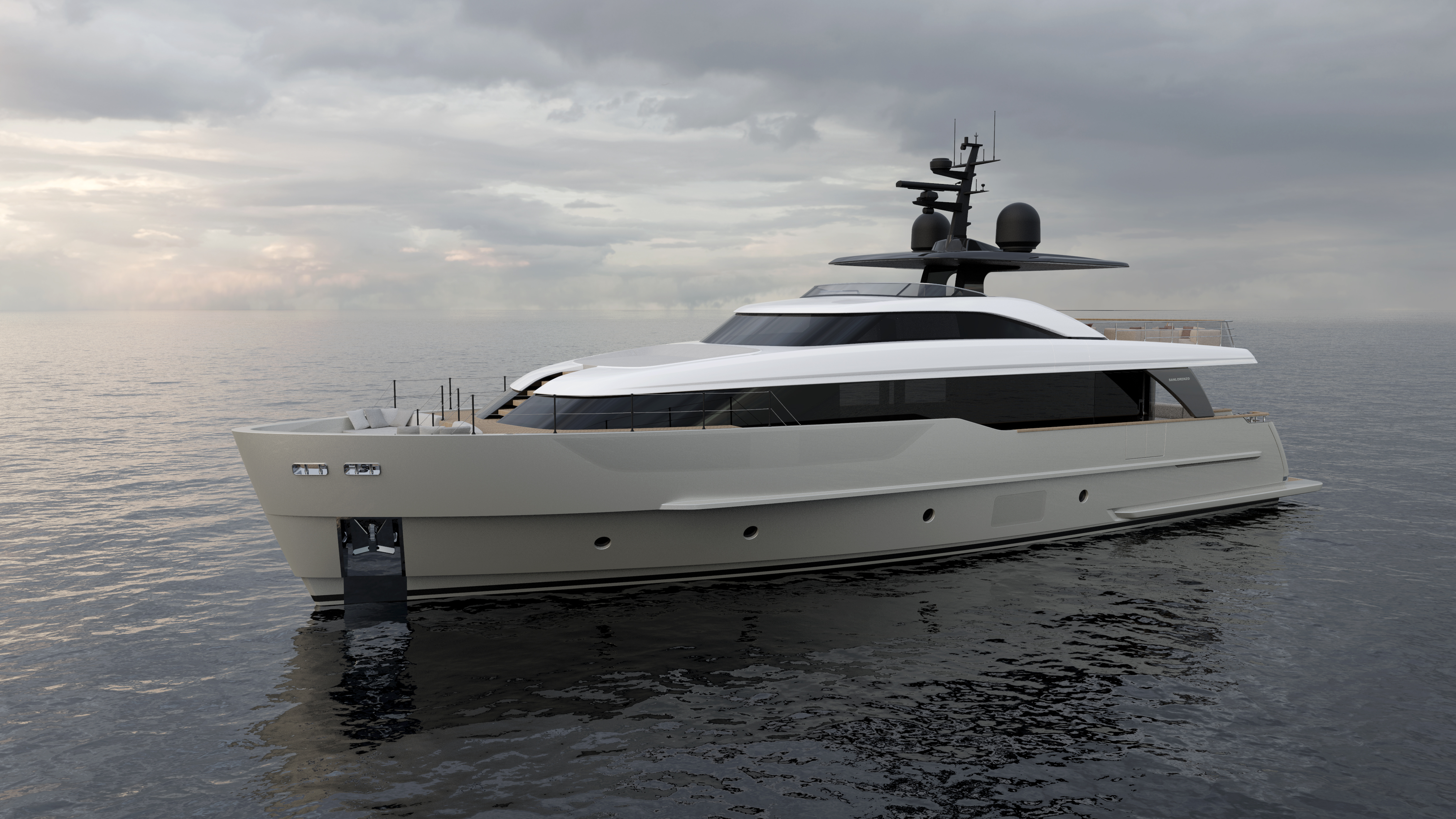 In its hybrid version, the performance of the SD90/s is guaranteed by a ‘sustainable hybrid’ propulsion system designed in collaboration with Siemens. The design of the SD90/s aims to offer high performance by exploiting the maximum efficiency of electric motors and optimizing the available power generated by lithium batteries that are recharged while sailing.

The geometric characteristics of the hull allow the boat to perform remarkably well both with hybrid propulsion between 6 and 10 knots and with traditional propulsion at a maximum speed of 17 knots. 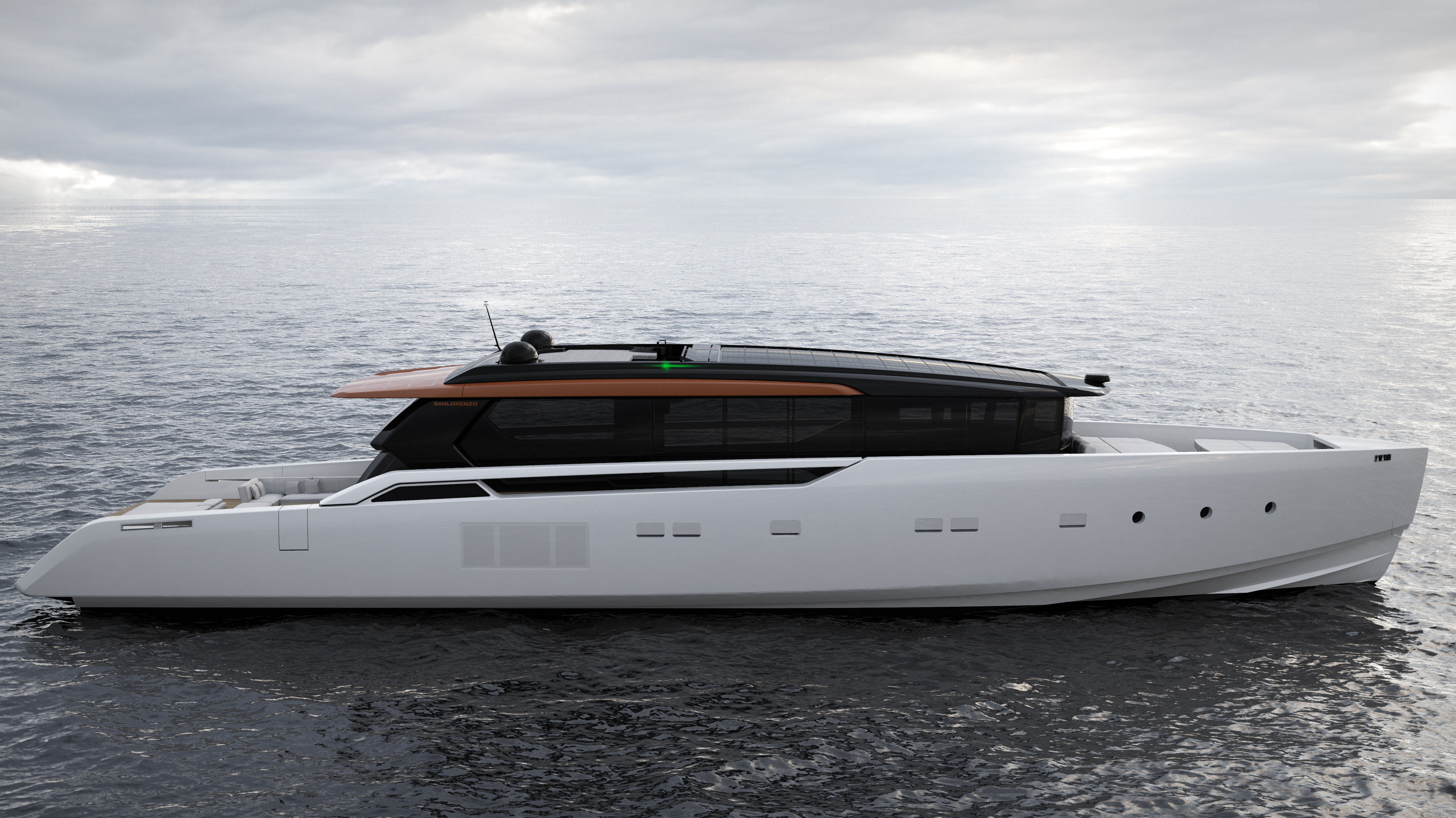 SP110 was designed with the low environmental impact technologies in mind. The model represents an advanced technological platform that combines innovation and sustainability with a design that favors maximum comfort. A project made possible by the collaboration of a team of professionals at the highest levels in individual skills: Bernardo Zuccon for the exteriors, Tilli Antonelli at Sanlorenzo product development, Marco Arnaboldi for the hull design, Piero Lissoni for the interiors. 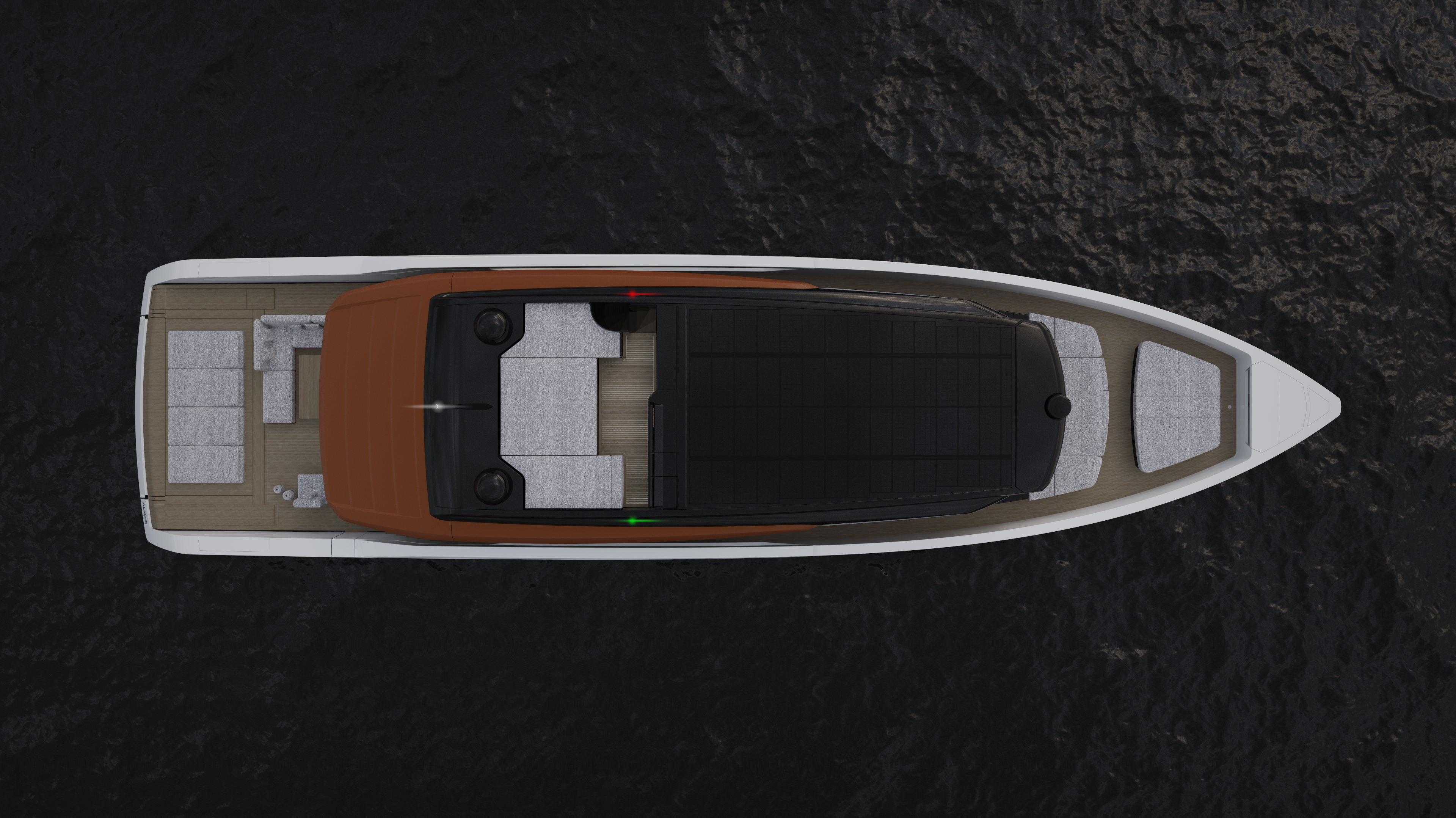 Fundamental to the realization of SP110 is the hull, designed by Marco Arnaboldi, optimized for use with hydro jet propulsion. This type of propulsion is an advantage over propeller propulsion because it is less sensitive to variations in the boat’s weight and therefore more versatile. The study of water lines has resulted in a surprisingly efficient hull with a maximum beam of over 8 meters for a total length of 33 meters. The double-edged flank guarantees on the one hand a width for buoyancy that maintains the highest performance and comfort even in rough seas, and on the other hand offers a considerable surface area that can be exploited both outdoors and indoors. 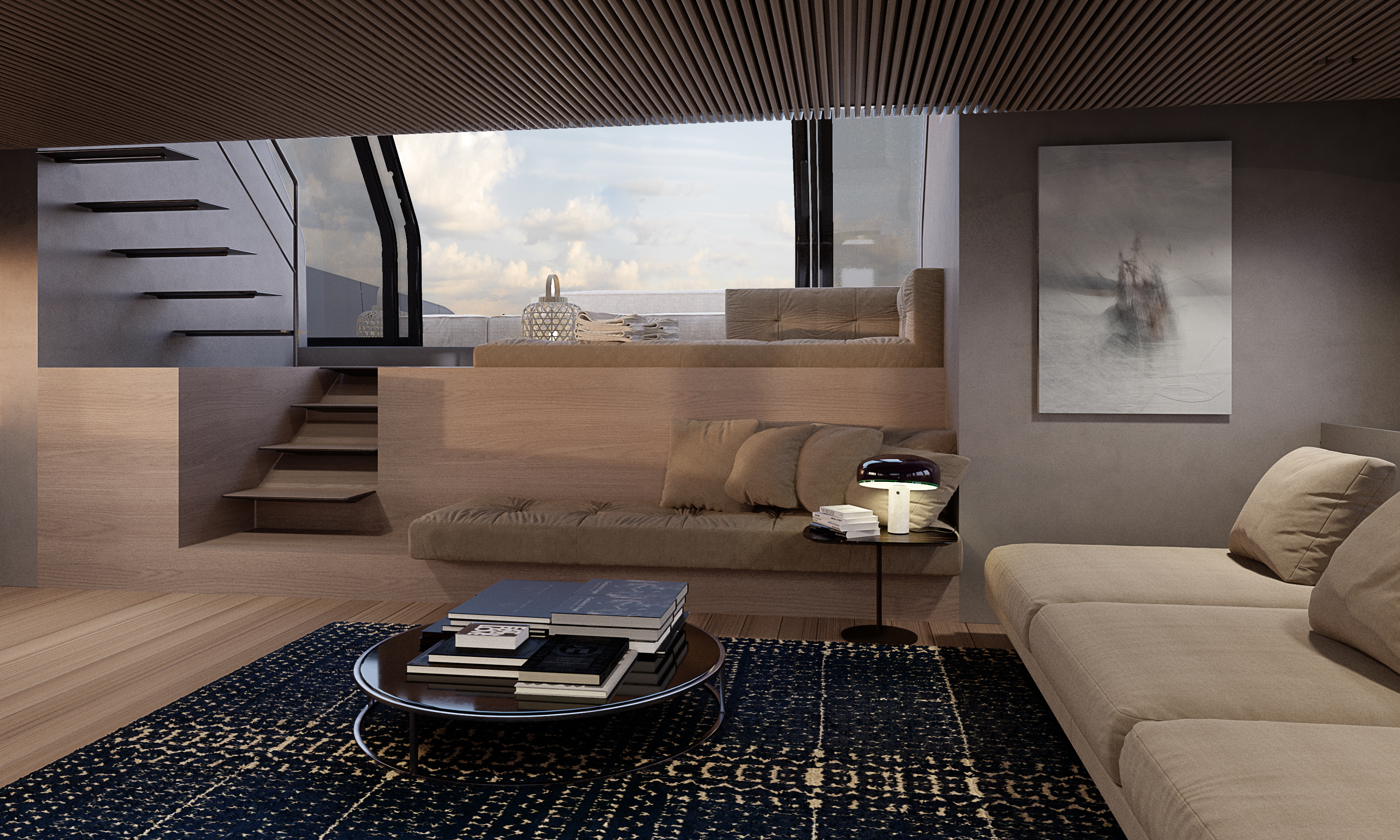 Another key element around which the SP110’s design revolves is sustainability. In fact, the boat is equipped with an energy recovery system that uses high-efficiency 6kW monocrystalline solar panels flanked by a package of lithium batteries that allow the boat to maintain hotellerie functions for a few hours without the use of generators. The design of the deckhouse was specially studied for the application of the solar panels in order to obtain the largest usable surface without disturbing the aesthetics of the boat’s profile. With a view to keeping the lines as homogenous as possible, there is a retractable anchor and the stern davit for launching tenders and other water toys is also retractable. 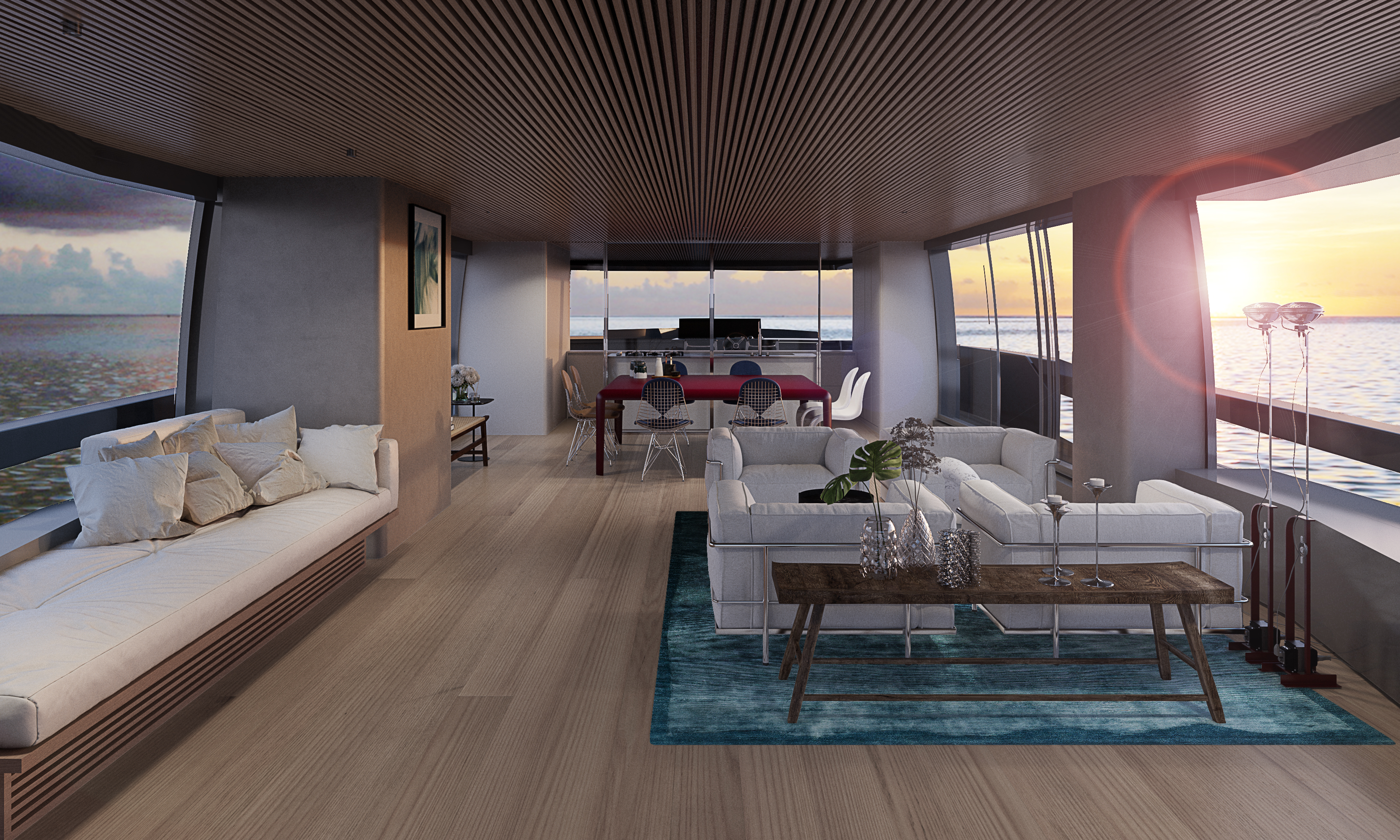 The SP110 is a two-deck yacht with an unprecedented layout, consisting of large surfaces that can be used in a variety of ways, for an interior and exterior liveability that is unequaled on a yacht of this type. The interior spaces, designed by Piero Lissoni, are articulated in such a way as to favor and simplify conviviality as much as privacy. On the upper deck, the large sun deck is complemented by the wheelhouse overlooking the bow. The lowered deck allows the lower deck to be enjoyed from a view of the living area aft and the sea, while outside, from the deck aft, there is visual access to the lower lounge on the main deck. These solutions once again allow a total synergy between the interior and exterior environment. 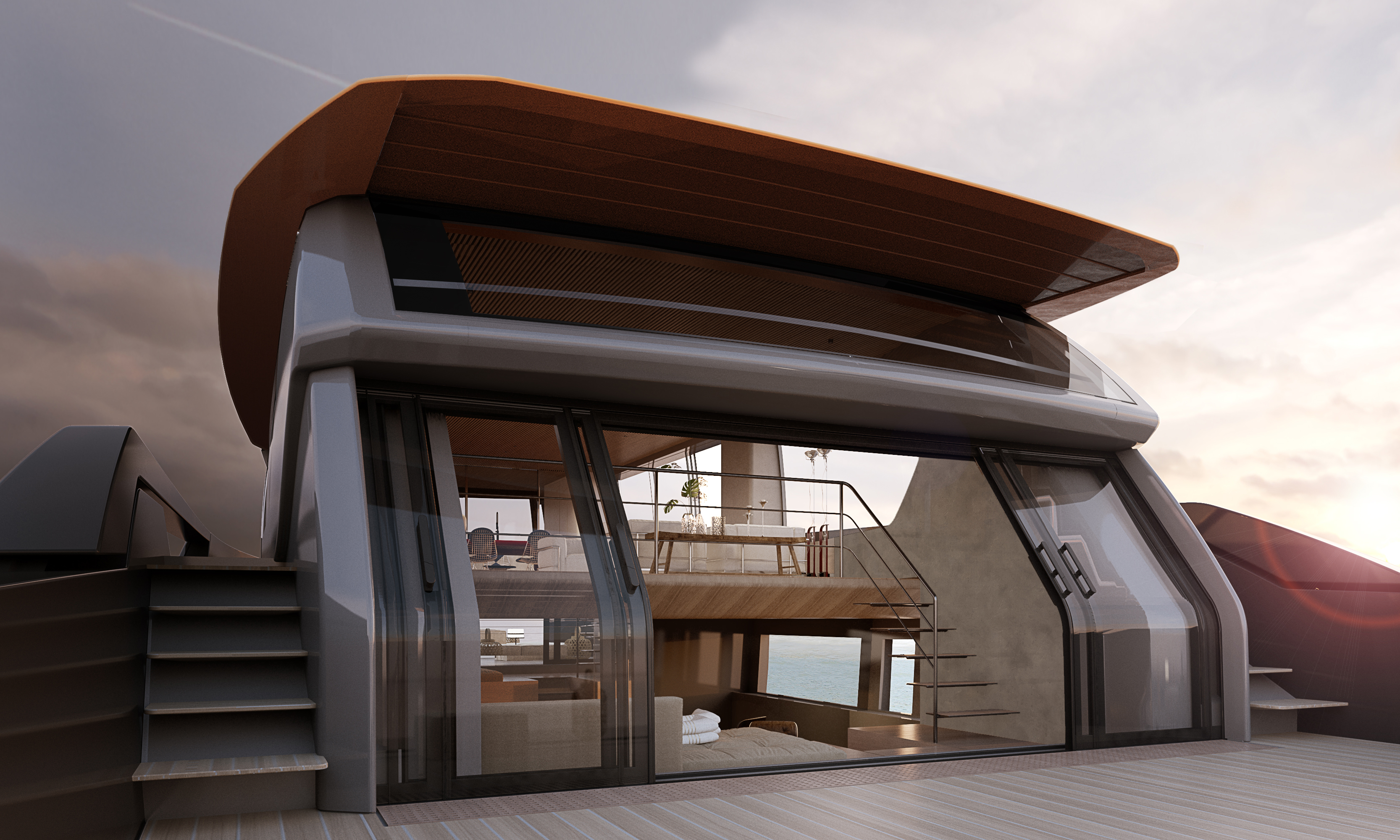 One of the most peculiar parts of the design is the bow area, equipped with an extended dinette with dining area and large sunbathing area, which can be enjoyed at its best especially when the yacht is at anchor, because it is fully invested by the sea breeze. 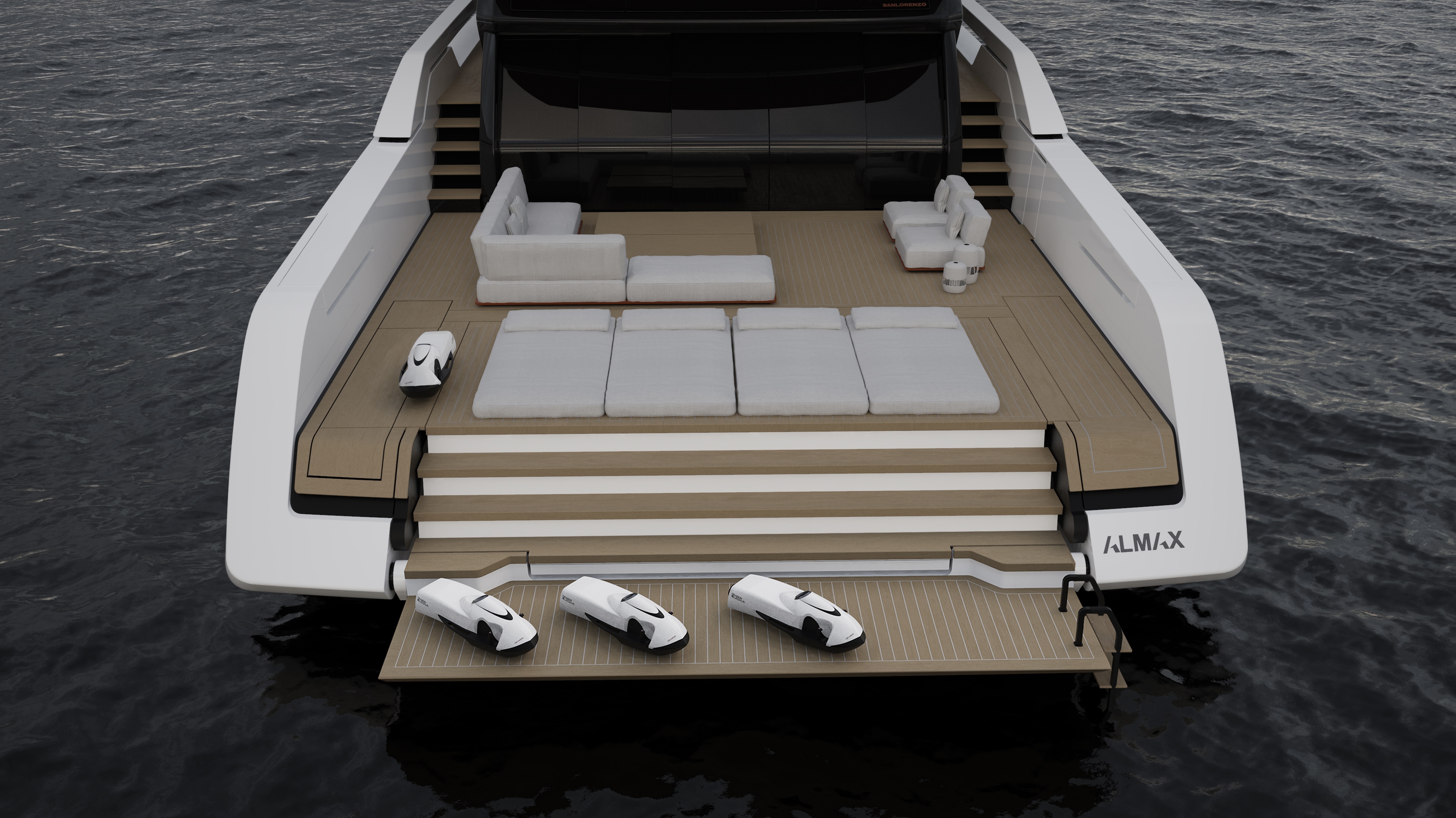 The interior volumes are definitely unexpected, with generous spaces both in the cabins of the sleeping area and in the private areas. For the furnishings, Piero Lissoni proposed a minimalism that perfectly embraces the philosophy of the overall design of the SP110. 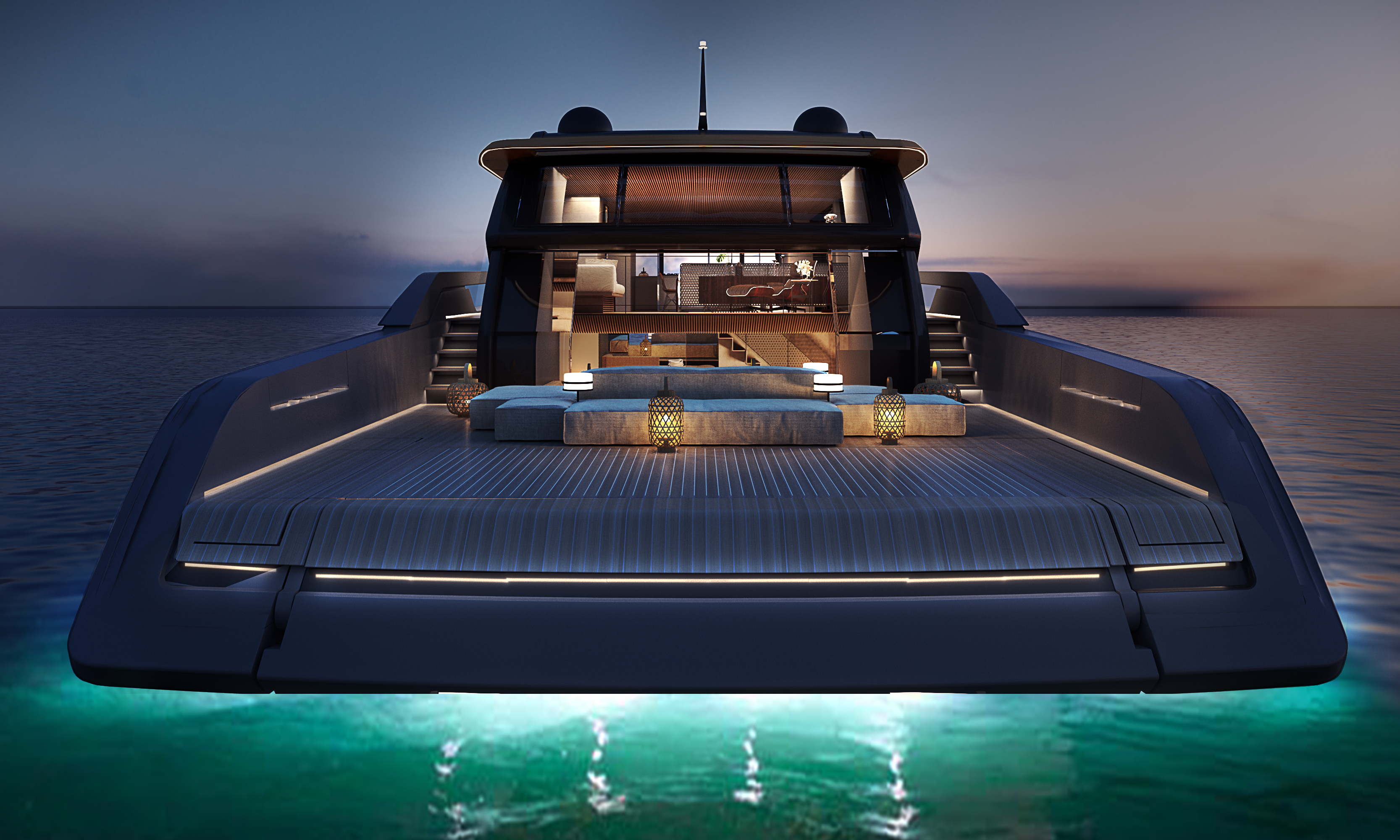 The models will be unveiled at the September boat shows.

Sanlorenzo was founded in 1985 in Viareggio by yacht builder Gionvanni Jannetti. In 2005, Massimo Perrotti became the majority shareholder in the shipyard. Sanlorenzo builds yachts ranging from 28.60 to 62 meters in length.