With that, City of Edmonds Development Services Director Susan McLaughlin launched the city’s “Reimagining Streets + Neighborhoods” initiative, aimed at “envisioning what the streets of tomorrow will look like, what will they feel like, who will they serve.” While Tuesday’s meeting — which drew about 70 people — was virtual, McLaughlin promised there would be six in-person neighborhood meetings plus a separate downtown workshop in June and July, with dates to be announced soon.

Here’s the timeline for the “Reimagining Neighborhoods + Streets” outreach this summer: 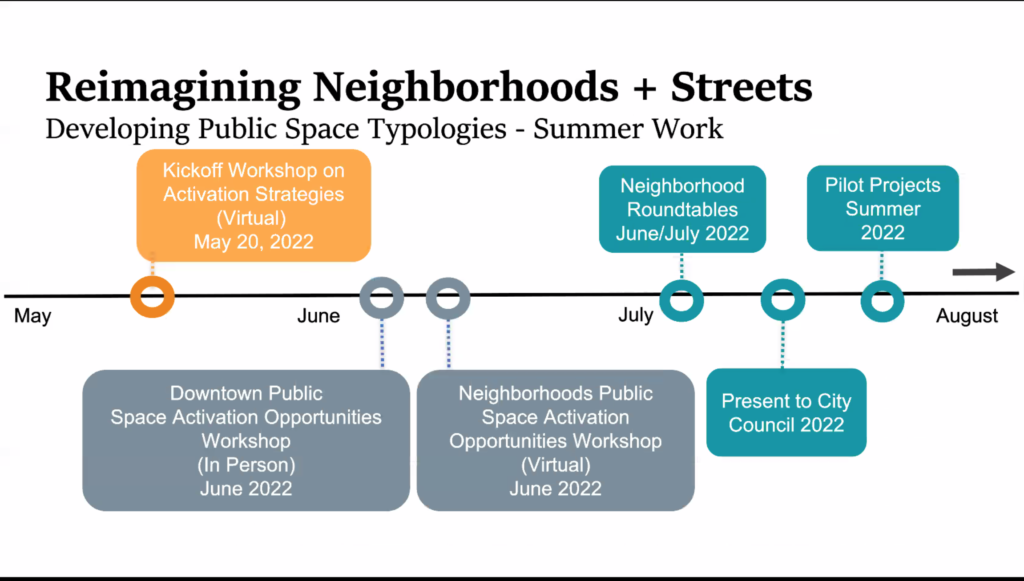 The city has hired two consultants — Environmental Works and the Green Futures Research and Design Lab — to work with city staff on the project. The Edmonds City Council will be updated on the effort later this summer.

The goal of the initiative, McLaughlin said, is to look at creative ways that Edmonds can use its public spaces — in particular its streets, sidewalks, alleys and parking stalls — for a range of activities. Examples provided during the presentation include block parties, holiday events, food trucks, beer and wine festivals and concerts. Some of the examples given are ones already familar in downtown Edmonds, where streets are closed for a range of events, including the Edmonds Museum Summer Market, the 4th of July Parade, car show, Halloween and the tree lighting. To offer more outdoor gathering spaces during the COVID-19 pandemic, the city also shut down a portion of Main Street on summer weekends for its Walkable Main program and permitted restaurants to set up streateries in public parking spaces.

While no Walkable Main program has been announced for this summer and all the streateries were removed earlier this month, McLaughlin noted that the “we’ve learned a lot from the pandemic that we want to record into a community conversation to really reimagine how our streets can better serve us, both as social hubs, to foster economic development and toreally steward environmental functionality of our right of way.”

Streets, McLaughlin noted, comprise approximately 77% of the city’s public space. For decades, people have viewed streets as a way of “moving people through our neighborhoods, through our streets, through our cities but really we need to recognize — and the pandemic did a great job of reminding us — that public spaces are really the living rooms as well, they are the gardens, they are the playgrounds of urban and suburban areas throughout our country.”

The meeting included interactive polling questions and breakout rooms. The first question asked of particiipants was, “What excites you most about this meeting?” Responses ranged from community, innovation and curiousity to distrust, apprehension and suspicion. (See below for a some of the responses captured in the poll.) 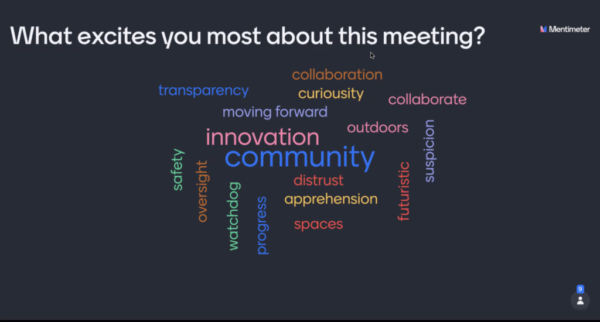 The second polling question asked: “What do you think of when you hear “public space?” Responses included parks, gathering space, community and public good. (A sample of responses is included below.) 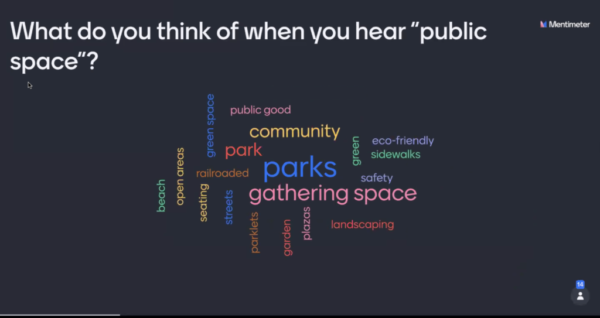 In the third polling questions, participants were asked “What do you think of when you hear ‘Street activities or events’?” Answers ranged from markets to street closure to parades to outdoor dining. (See sample of responses below.) 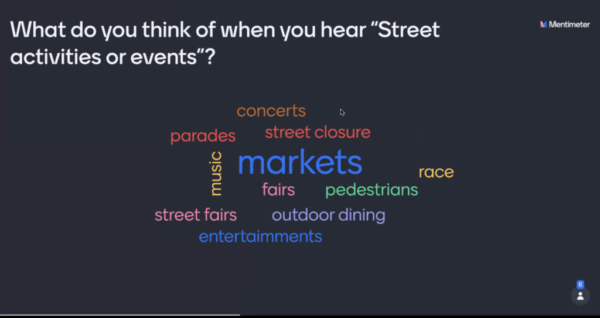 Consultant Jess Zimbabwe of Environmental Works then offered an explanation of what constitutes a right of way, “that entirety of the space that runs from the outside edge of one sidewalk to the outside edge of the next sidewalk,” which includes planting strips, and parking and travel lanes. 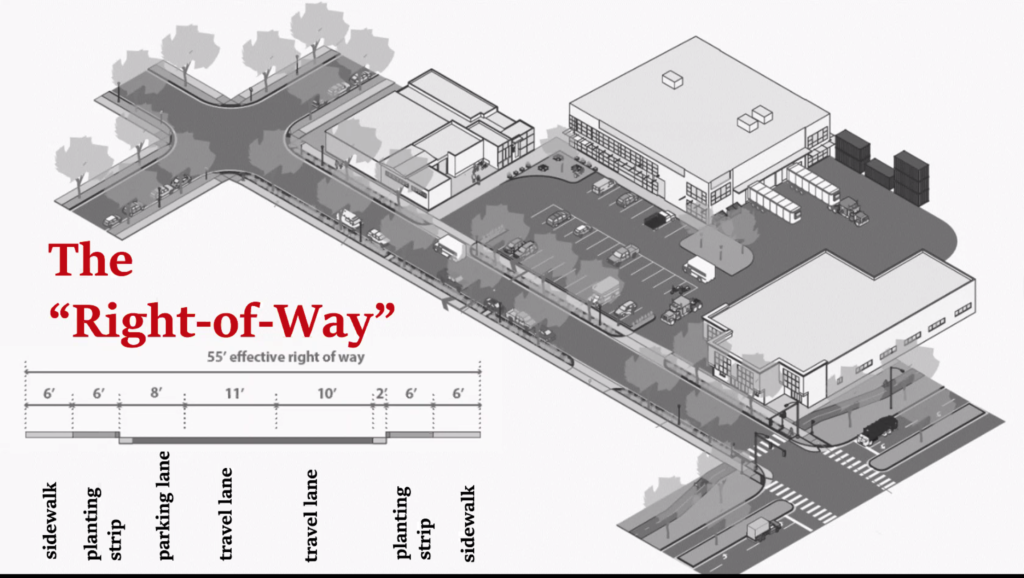 Next, Laure Hedland, project manager of Green Futures, discussed the reasons for activating public spaces. These include supporting community social life, creating more places for enjoyment and making public spaces safer and more livable. She pointed to other cities in the U.S. and worldwide that have developed public space activation programs, from Tampa, Florida to Vancouver, B.C. to Stockholm.

Daquan Proctor of Green Futures then walked participants through public space locations that could be suitable for a range of activities: Non-arterial intersections, for example, could host community art events or block parties. Food trucks, farmers markets and movie nights could be located on streets. Parking stalls could be places for streateries, outdoor retail and public seating. Medians and planting strips could include parklets, tree art and flower festivals. And sidewalks could be a location for a bike hub/repair station, buskers and performers and Little Free Libraries.

Proctor also pointed to the possibility of activating alley space for activities like dining, artistic lighting, murals and parties/mixers.

Next, participants were sent to virtual breakout rooms, where the smaller groups considered a series of questions that included how they have used public spaces as a result of the pandemic; and what street activation strategies might be possible at the neighborhood level.

During a report back to the larger group, representatives of each breakout room shared a summary of their discussions. Among them:

– Before deciding on a specific event for a neighborhood, it’s important to create a master plan that anticipates obstacles for success, along with a map for achieving goals once that plan is established.

– Smaller events like block parties would provide an opportunity for people to gather in a more intimate way and get to know each other better.

– When it comes to street activation strategies, neighborhoods need more attention than downtown.

– The vast majority of Edmonds is suburban in scale so we need more strategies that are responsive to that, such as block parties arranged by neighbors.

– Because so many of the neighbohood businesses have parking lots, that might be a good location for events.

– Parking is a problem in downtown Edmonds, so closing streets and taking away parking may not be the best idea.

– Improving sidewalks outside the downtown core is key; so are improvements to Edmonds’ Highway 99 area.

– While the downtown streateries were popular with many, they should be better designed and permanent structures.

– It’s important to have anough sidewalk and public space to ensure people can get through the neighborhoods and safely get to where they are going.

– Too much success could be a problem, if an event became too touristy or overcrowded, taking away from Edmonds’ existing charm.

At the end of the presentation, McLaughlin noted a theme running through much of the discussion: That neighborhoods need basic infrastructure, such as sidwalks and street lighting, to fully take advantage of many of the activities mentioned. “We hear that,” she said. “That is something that I take very seriously and part of this work is creating street design with standard infrastructure. Just because we are talking about activation does not mean we’re not giving attention to that permanent infrastructure, which is critical for livability within all of your neighborhoods.”

You can learn more about the project on the city’s webpage or you can email ReimaginingStreets@EdmondsWA.gov.